On Sunday, I turned 45. But it was Palm Sunday, and my 7-year-old goddess wanted to go to church to honor the son of God rather than letting me have a heretical sleep-in day, so 45 didn’t seem so old after all. Jesus is what…pushing 2,046 years old now?…so I won’t complain about being halfway through my 40s.

A time for minor self-reflection anyway, though. I’ve known my 21-year-old son for what is now approaching 18 years, and later this year I’ll clock in a “sweet 16″ years of marriage to his mom. By the end of July, I will have been a biological father for eight years (well, with diaper changing duties, at least; I guess I should count those nine-ish months in the womb as well and make it 8.75 years of bio-fatherhood by July).

I don’t know if I’ve been the best father and husband, but I like to hope I’m at least in the top 80th or 90th percentile (70th? Please don’t say 50th or 60th…). No one’s complained overly much about my performance in either role (well, not daily, anyway), so I’m going to assume I’m doing all right. Good thing, too, because I’m getting too old to change much.

But anyway, it made my birthday to get this card from my little goddess-girl: 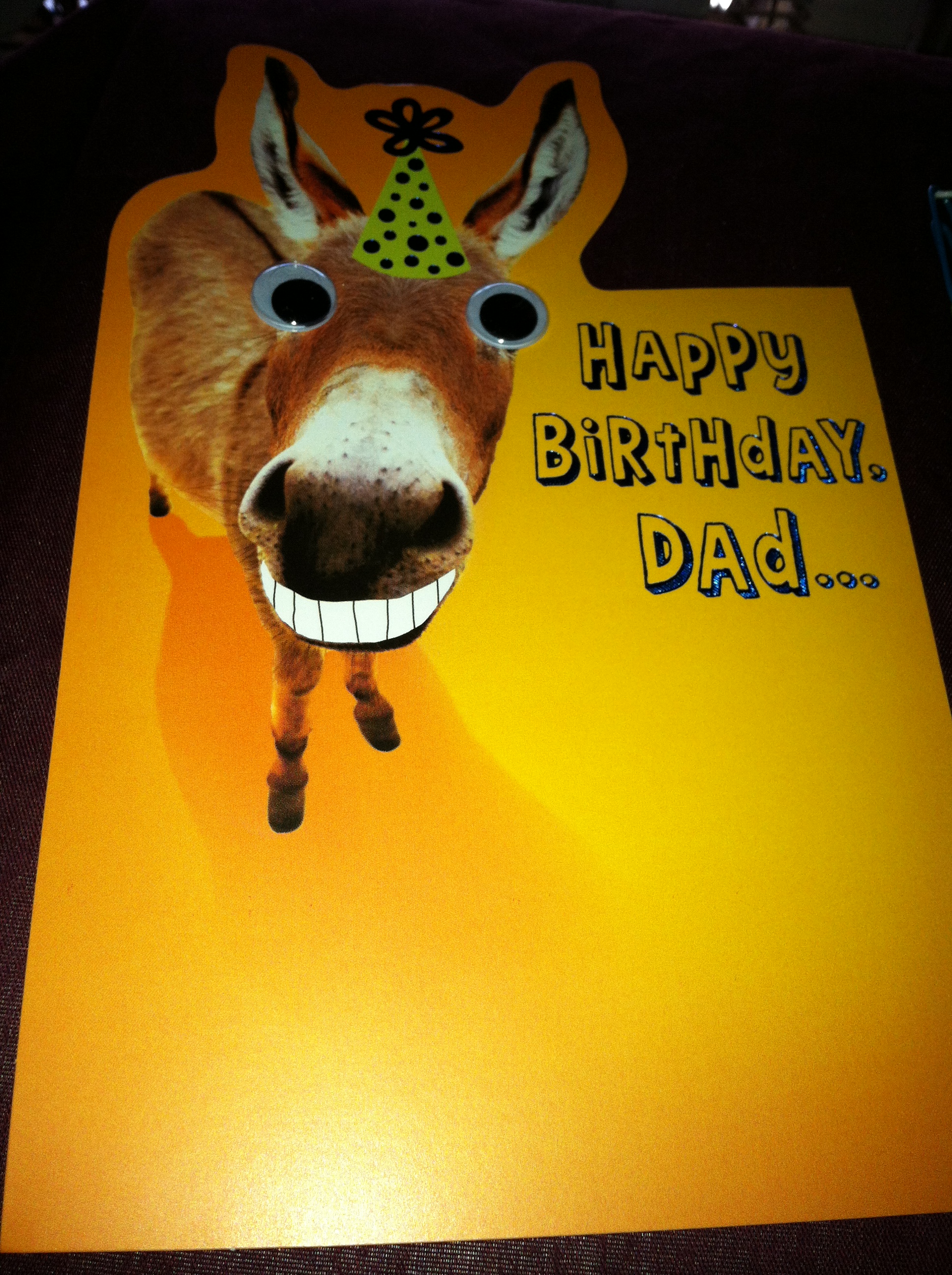 When I open the googly-eyed cover, what does the card read inside?

“…from your smart-ass kid!”

It seems my daughter found the card before my wife realized she was rooting around the more grown-folk cards. But, but that time, it was too late. They both realized I’d get a big chuckle out of it (I guess my goddess-girl is starting to “get” me), and so my wife relented in letting our daughter pick it out for me. Besides, she’s heard a lot worse than “ass” come out of my mouth…it’s a family tradition; you should have heard some of the words and colorful phrases my cool-as-hell-and-still-miss-her-a-lot mom popped off with when I was a kid).

I mean, my daughter was practically crawling out of her skin for me to open the card the night before my birthday because, as she put it, “I really love to hear your laugh, Daddy.” But I made her wait until the morning for her to get that payoff.

Now, I’d be remiss to leave out my wife’s contribution. She got me a fancy 3-D textured card with faux parchment pages inside instead of just the usual cardboard:

Inside that card, aside from the normal romantic/sweet pre-printed sentiments, my wife wrote a little note. But we’ll leave that between her and I…oh, it wasn’t anything salacious, you pervs (God love ya for being that way, though), but still, it’s that from-the-heart stuff, and I don’t want to go ruining my wife’s hard-earned tough-but-fair, bacon-eating-but-also-yoga-practicing reputation.

In short, glad to have another year on the planet to be a husband, as I don’t know what I’d do with myself without my wife. Glad to have another year under my belt as a dad; even though the goddess can drive me up a frakin’ wall sometimes, I find it hard to imagine life without her and already dread the day she leaves our home. Overjoyed to see my son find success in college and in his music and elsewhere. And, frankly, glad to be starting another year of life to fling prose at folks like you, in yet another blog (but please, someone knock me out if I try to start yet another one next year without killing off an existing blog). 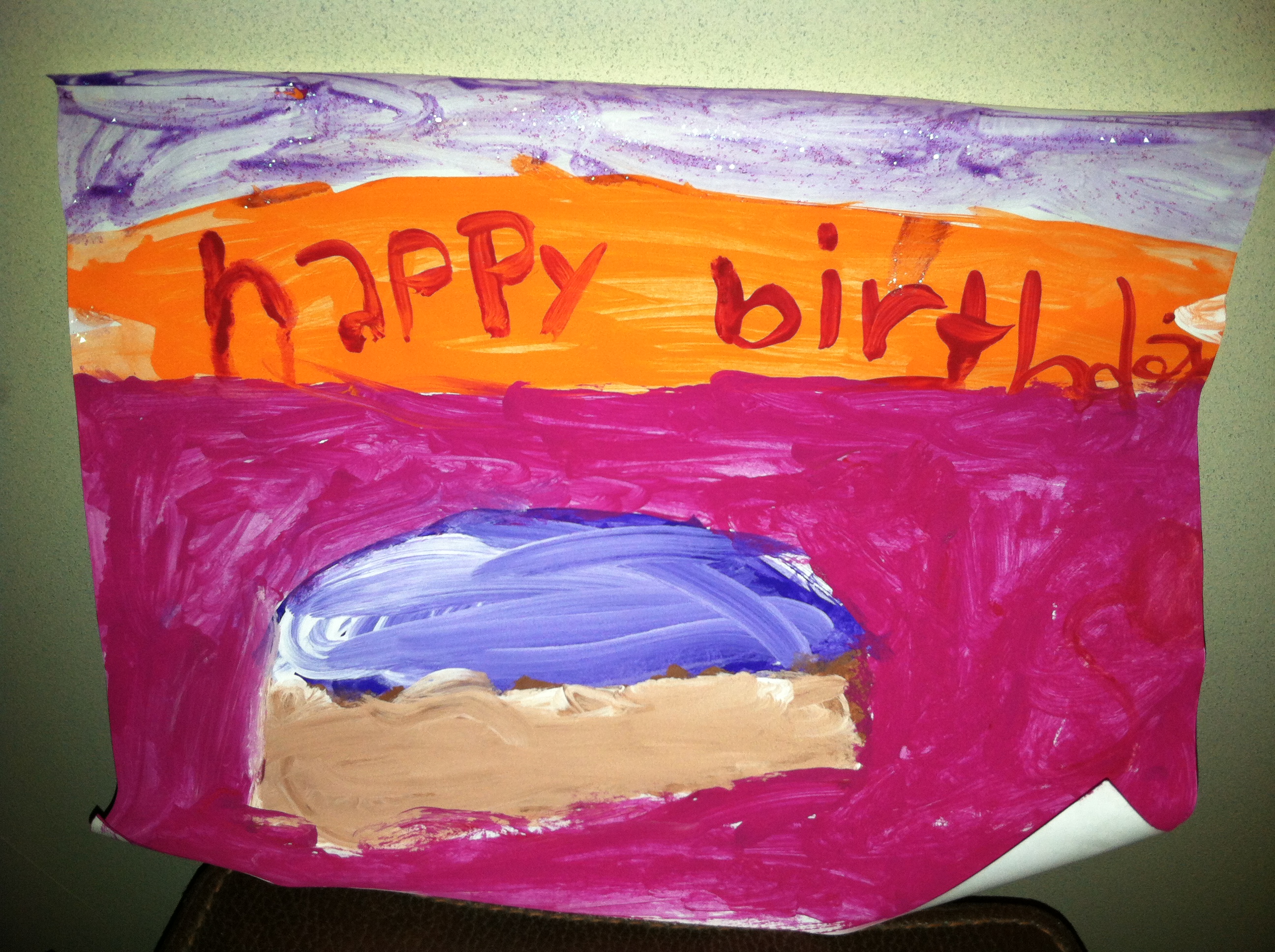 What makes this special isn’t necessarily the minimalist, semi-abstract painting style (I mean, her painting can be pretty cool but her drawing is where it’s really at right now) but rather the sentiment behind it. The petite goddess went to bed very late on Saturday night (after 10) and, as is typical (even though we didn’t outright say it this time but dammit she knows better), she’s not supposed to get up early when she goes to bed late.

Despite this, it turns out she got up at around 7 a.m. to start watching Netflix on the iPad. However, when I got out of bed at eight to put the percolator on so that my wife would have coffee available well before 9 o’clock rolled around, my little girl had temporarily relocated from her room upstairs to her painting nook downstairs. And she told me, as I came downstairs, “Don’t look, Daddy, I’m painting something for your birthday.”

Later, when I was up and about for real, this is what I was allowed to finally look at. So, given her loving vibe of wanting to spend some of her prized weekend screen-time to paint me something really early in the day, I’ll forgive that whole “getting up way before she should have” thing.