To pay the bills, I’ve been a journalist since 1992, but since it’s been for industry-specific and association-based publications, so no one’s ever going to see me on the newsstands—unlike my wife, the non-journalist, who years ago wrangled herself a monthly column for one of the most prominent weekly newspapers here in Maine: the Portland Phoenix.

No, I’m not jealous. I’m NOT! Just healthily competitive.

I’ve also been blessed to be able to work from home as a freelancer and telecommuter since the day we moved from Chicago to Maine in spring 2003, which is a good thing not only for my non-morning-person demeanor and lack of desire to drive in rush-hour traffic but also because our daughter is one of the most time-intensive humans on the planet and I’d probably not be half the husband or father than I am—and sometimes I’m not sure I’m half what I should be—if I had to work in an office.

But you know, having subsidized insurance benefits, official vacation time and stuff like that would be a nice perk of office-based life, so why don’t you all keep reading this blog, sharing it with others, and help propel me to prominence and greater earning power so that I can arrange for those things without having to give up the pajama-wearing journalist lifestyle and hands-on parenting?

Hi, I’m known as Deacon Blue online, or Jeff/Daddy/Honey/Hey You! in personal interactions. Blogging’s been part of my life 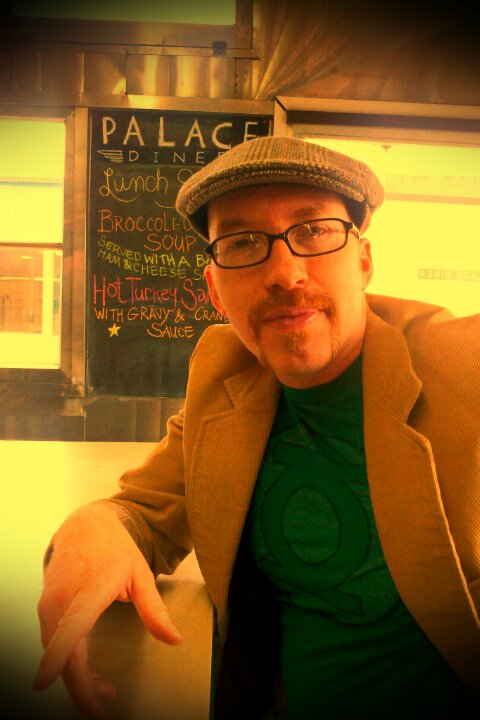 since early 2008, when the cool kids started doing it (that is, my wife and then-16-year-old son) and I followed like a verbose lemming. To my credit, I followed my own path thematically, at least, with an initially spiritual and later mostly intellectual trash-talking/silly rambling blog Holy Sh!+ from Deacon Blue and later adding the superhero fiction blog Tales of the Whethermen.

But now I’ve progressed from a lemming with my own ideas (ironic or oxymoronic as that may be) to a jealous scavenger (a green-eyed jackal?).

Simple. My wife got known as a mommy blogger, even though her blog Black Girl in Maine is more of a forum for social commentary, personal growth, occasional venting and some sharing of her roles as administrator, mother, daughter and wife. As I write this bio in 2013, she’s been named to Babble.com’s Top 100 Mom Blog list two years in a row, she’s done a live interview via Skype on MSNBC’s “Melissa Harris-Perry” show, she was part of a three-person panel for an interview/call-in show called “Maine Calling” on our state’s NPR radio affiliate, and she’s been interviewed by various reporters and columnists for her insight on racial and social issues in current events. Oh, and for years now since we moved to Maine, she’s been doing a monthly column for the Portland Phoenix newspaper called “Diverse-City.”

Now I want in on the action.

Sort of. I also figure that in between making a name for myself and drawing all sorts of sponsors, ads and free swag, I might actually be able to share some entertaining and useful information with all of you and maybe learn to be a better father and husband while I’m at it.

You know…until I hit the big time and surpass my wife’s growing popularity, and then I can hire some people to do that for me while I sip craft beers and watch marathons of “Battlestar: Galactica,” “Breaking Bad,” “Farscape” and “The Walking Dead.”