…actually, as it turns out, I think Ruby (the name of my daughter’s American Girl Doll), will not need medical attention, though there is an American Girl Doll store in the vicinity of Boston, just a few hour’s drive from us, and for my little goddess, that potential journey is like a Muslim going to Mecca or a Christian to Bethlehem, methinks.

For something like…oh, I dunno…four years now I’ve repeatedly entreated my daughter to please, please, PLEASE put all the stuff she’s taking with her for a car ride (and she has to bring several things in the car even if that ride is five or ten minutes to a local store) into one of the many tote bags she possesses so that nothing gets dropped, she won’t trip getting in and out of the SUV, etc.

I think she does it one out of every 30 times. Instead of listening to me, she puts a book or two and some art stuff in a tote bag and then insists on juggling Ruby and one or two other items that for some strange reason aren’t bag-worthy (even though they’d fit). Usually, there isn’t a problem, but I always know there will be one day, which is why I want to rip out my hair (chest hairs, I guess, since my head is pretty much bald these days) every time she does this.

I didn’t even know at first. But I did know something was wrong, as I could sense a downturn in the mood behind me, and the little goddess was crying a little.

Of course I ask what’s wrong. She tells me she dropped Ruby and injured one of her eyes. I’m confused, as the doll looks fine. Turns out that when she would lay Ruby down subsequent to the tumble mere minutes earlier, one eye wouldn’t shut all the way.

It went like 80% the way down and could be slid the rest of the way, but my daughter was grief-stricken. I gently explained that Ruby is fine overall, the problem might correct itself, and really, if she loves the doll that much and wants to take her everywhere, please for God’s sake start putting stuff in a tote bag.

She still doesn’t, by the way. Apparently, some lessons are destined never to be learned.

My wife, after we picked her up from work and she was briefed on this epic catastrophe (*cough cough*), noted that the American Girl Dolls stores have hospitals to fix dolls. She also tested Ruby out and proved that if you don’t lower her down at a snail’s pace (like our daughter was doing), the eye closes fine. Not that this consoled the goddess one bit. Granted, she wasn’t crying anymore, but she was sad.

Bottom line, Ruby’s fine. Today, there seems to be no worrying about the doll, and it served as a lesson that you should still love your children (even the ones who aren’t flesh and blood) if an injury disfigures them (which it didn’t). Did my daughter learn anything from this?

But she has learned that a visit to the American Girl Doll store is probably in the near future even if Ruby doesn’t need a medic.

Here’s the doll the day after. I think we won’t need plastic surgery or grief counseling for her: 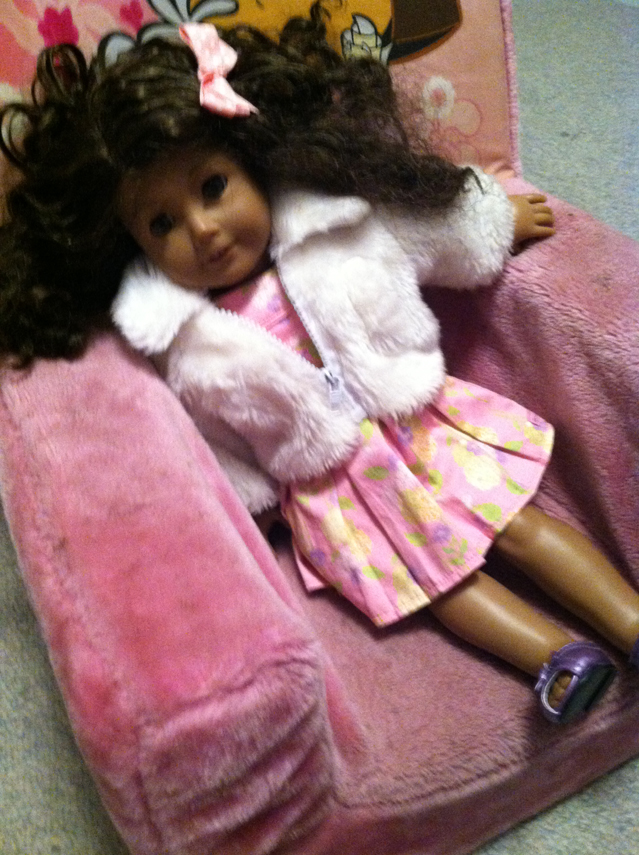 (By the way, now that I’ve mentioned AMERICAN GIRL DOLL several times, can I get some free food accessories, a bed or some new clothes sent to me? I promise I’ll have my daughter review them and I doubt you’ll be disappointed, American Girl Doll public relations people…*bats eyeslashes*)