I went to a tweetup here in my neck of the woods in New England. My first-ever tweetup, in fact, which gave me the chance to meet a lot of cool people in my state, the vast majority of whom I’ve only ever before interacted with personally via Twitter. Lots of fun, lots of drinking (though I only got one beer since I had to drive), tasty appetizers aplenty, and good people.

Also, a late night. Which got later when we returned home. Number-one son is home for part of his Spring Break, with girlfriend in tow to meet his mom and check out the part of the world he considers home. We corralled them to watch the little girl goddess while the wife and I went out for a rare night together sans child, but then of course we got caught up in the late-night conversations that traditionally take place around here in the kitchen, made longer since there were four of us this time rather than three.

Don’t tell the goddess that these talks happen; she’ll feel left out, refuse to go to sleep and then sneak down to eavedrop, probably.

All this is a long-winded way of saying that while I can ramble on (as I already have), I don’t have anything much to say, so…um…since I’m in a joyous and not-hungover mood, here’s a photo of my wife and daughter dancing from summer 2012 (yeah, that’s my pale-ass leg): 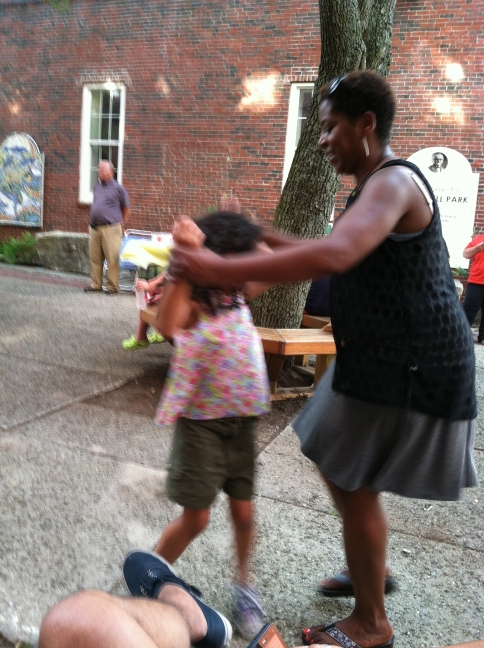