As sharp as my daughter is, there are some things she’s just not in a rush to learn. Many’s the time in her so-far seven years of life that she tries to leap ahead in some area she is not nearly ready to tackle, while ignoring some critical skill she should be mastering beforehand. Shoe-tying was my Waterloo…my Custer’s Last Stand…my Bonnie and Clyde shooting it out with the feds and getting riddled with lead moment.

Try as I might to get my daughter to sit down and learn to tie a basic knot, she continued to soldier on with as many slip-on and Velcro-tabbed shoes as she could. When she was forced to wear shoes with laces (that we sent her out of the house with tied tightly) and they came undone during the school day, she would convince teachers or fellow students to tie them for her (she’s named after a goddess; of course she can get people to do things for her…).

It got to the point where using reason and logic wasn’t getting through to her (it rarely does when she’s dug in her heels), shaming her that most of her classmates could do it wasn’t working (she’s too self-confident to be daunted by what others do that she can’t), and yelling wasn’t working (that often works better than logic when she’s in a stubborn mode, but not on this subject it wasn’t).

Finally, I resorted to bribery, and bought a DVD she desperately desired and told her she couldn’t have it until she learned to tie her shoes. Mind you, she really, really wanted this particular Scooby-Doo movie. In part because she liked it and in part because she really pissed me off one day in the store almost a year earlier when I had the DVD in the cart for her, and the consequence of her misbehavior was that I put it back on the shelf.

So, buying it for her and telling her she could have it…and be assured I would never take it away from her even in a moment of anger…was HUGE! She was excited about getting that DVD. However, as with so many things in life, her stubbornness won out. 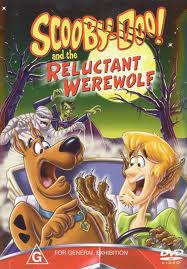 The damn DVD she wanted so bad that *still* wasn’t enough to do the trick.

The DVD sat in my office at home for months. More than six months, I think, before she finally decided she was ready to be tutored about shoe-tying and subsequently mastered the basics in less than a half-hour (See! Why didn’t you listen to me months ago and get this out of the way?!) now that she was finally invested in the process.

Still, there’s been a sloppy aspect to her tying of laces in the several months since then, given that she’s usually in a rush to go do something like watch “Good Luck, Charlie” or “Wizards of Waverly Place” on the iPad. So, in recent weeks my wife keeps telling her she’s going to trip over her untied laces and die a slow, agonizing death due to blunt trauma and internal bleeding and possibly being pecked to death by crows because she’s paralyzed from tripping and twisting her spine…all if she doesn’t do a better job with the knots.

(I never made such dire predictions…uh…OK, fine! Well, at least I hadn’t openly spoken such warnings to my daughter in the previous couple weeks because I was tired of her ignoring me. Happy now?)

…anyway, upon picking her up at school this week, and asking her to switch from snow boots to gym shoes since we weren’t going to have time for her to hit the playground that day, I watched her make big loops that were loosely knotted.

“Honeybunch,” I said. “Hold on.” I knelt down, and grabbed the base of each loop right next to the knot. “Sweetie, do this, just like I’m doing, and pull really hard. When your fingers are that close to the knot, you’ll get it nice and tight so that you won’t come undone as much, especially if you double-knot it.”

She mimicked my effort on her other shoe, and voila! Perfect tying.

A long seven-year-plus road to get there, but I think the final step has been taken, and we’re at the end of the journey on that particular battle.

Now on to untie some of the other knotty issues in her basic life skills, like following directions in the order we give them and watching for traffic when she plays outside…