There are times, especially in the car when my wife is already stressed about bad drivers all around us, when I get shushed or “strongly encouraged” to shut up, because I’m explaining something to our daughter and the mounting verbiage starts to intrude upon my wife’s peace. Given that my wife has a master’s degree and reads voraciously, I find it ironic and amusing when she tells me during these times something to the effect of, “Just give her a simple answer and stop trying to explain everything so much.”

But, aside from trying to tone it down in the car or during other times when the wife needs peace and 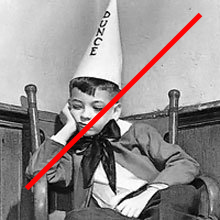 quiet, I won’t dumb it down for my daughter, and I don’t think you should dumb it down for your kids, either. I’m sure when the stress levels aren’t high, my wife would almost always agree with me on that. Maybe.

Now, there are two very good reasons for this.

The first might be pretty personalized to me and not applicable to all of you: I might as well get into longer explanations and, using somewhat simplified language a 7-year-old can grasp, speak to my daughter more or less like a grown person. Because she’s going to pelt me with endless questions anyway. I always thought this was supposed to stop around 4 or 5, but apparently my daughter is gearing up to be an encyclopedia when she grows up, because there are always more questions, no matter how thoroughly I think I’ve exhausted a topic.

The second reason should, I think, apply to almost all of us: If we want smart kids who can make their way in life, let’s not treat them like idiots. Now, I know that not all parents have huge vocabularies or deep education and that not all kids read and speak a grade or two above their current level, like my daughter does (if only her math skills were progressing at the same accelerated pace, but with the two parents she has, that might not be realistic to dream). But you don’t need to be a scholar.

My mom, bless her late, short-tempered, boisterous and passionate heart, spoke to me pretty much like a grown-up. Although she read a lot (mostly novels, and many of those Joan Collins, Andrew Greeley or Sidney Sheldon), she wasn’t highly educated. Barber college was the height of her educational pursuits. But she had opinions, she was sharp and savvy, and she and I were sometimes as much buddies as parent and child, particularly in my early years when she was raising me mostly on her own. From early on, I was able to speak and write well, thanks to my mom as much as my genes and schooling, I suspect, and I was sometimes more comfortable and confident speaking to adults (and listening to their conversations) than I was with kids my own age. Kids my age, I had pretty much decided, were more for playing with than having discussions with.

I am determined to give my daughter the same edge, so that she can speak to adults not simply as elders but at times as peers. While she may be young, she’s a human just like the grown-ups are, and she has opinions. She deserves to be heard at times, and so she needs answers to complicated questions. If I speak down to her, I do her a disservice. There will be many times adults will lead her astray in life, intentionally or unintentionally, and I want her to be able to recognize when that happens and stand up for herself when it does.

Besides, as she grows and matures, it heartens me in a benignly passive-aggressive way to have heard my wife say something to our daughter in the car the other day and the little girl try to tweak the words into something that would serve her needs more than ours as her parents. When my wife tried to correct her, the wee goddess sweetly answered, “But mommy, your words implied that…”

That made me proud. It gave me hope that our daughter will shine in this harsh world and hold her own against it.

Am I buying us trouble by being so eager to arm my daughter with not just basic learning but also understanding of subtleties and broader contexts? Oh, yes. She will probably be better able to maneuver and fool us when she hits her teens than most of her friends.

But I’d rather she be out in the world well-armed, well-armored and well-trained to meet the monsters big and small waiting for her.

4 thoughts on “Refusing to Dumb It Down”