You may have noticed I’ve been kind of quiet around here, on the other blogs and on Twitter for the past week or two.

Or maybe you didn’t notice. If you didn’t, don’t tell me; I’d prefer to believe I was missed terribly.

Anyway, more than a month ago, I had a blog post called Handy(ish)man, wherein I talked about the project to redeem my masculinity with the wife, be a hero to my daughter and start getting this big old house in order. I mentioned back then when I posted pictures that I was probably 20% through the wallpaper removal process.

I wasn’t too far off, but it was probably a little under 15% of the total wallpaper in hindsight, and it was among the easiest part to get off. You see, near as I can tell, there have been various attempts to remove wallpaper over the years, but never an attempt to actually remove all of it. The house is like 120 years old or so, and I don’t think the wallpaper went back that far, since it seems drywall of some sort was put up over the old walls, and back when it was built that wasn’t a product available to be used. But I daresay that the oldest wallpaper I took down was easily 50 to 60 years old; maybe more. Worse, in some places the wallpaper was five layers thick (though only two or three layers in most spots). In the end, I didn’t literally get it all off because there were little bits that just refused to budge even spraying with the wallpaper removal chemicals. And there were patches near the top of the walls I didn’t try too hard to fully remove, as I was afraid I’d compromise the drywall, which was a bit crumbly in a few places and was slightly loosened from certain portions of the wall. But I got like 98% of it off, and that means I’m about 3 bazillion% more diligent than anyone before me was.

Fortunately, although there were bits left, and various holes, cracks and the like, plenty of spackling and caulking hide a multitude of sins, along with primer and two coats of paint.

End result: The little goddess was thrilled with her room. Better yet, I got it done before her birthday, despite the fact that I lost about two weeks worth of work due to the fact the dust was killing my wife via her allergies, we had a weeklong-plus heatwave, and it wasn’t until a few days before the little girl’s eighth birthday that my wife (God bless her soul) was finally able to finagle an all-day trip to Boston for both of them so that I could work non-stop to finish everything up instead of fitting work in a few minutes at a time here and there.

But, enough about that, since I’m not sure the horror of doing this job (10 to 12 hours of wallpaper removal and another 6 to 8 hours of priming, painting and detail work) when I’m not naturally inclined to like this kind of thing enables me to make funnies about it. How about I share some photos instead? (You can use the link up above to the older post to see the horror of the wallpaper, which doesn’t begin to capture just how horrible, but it’s close enough) 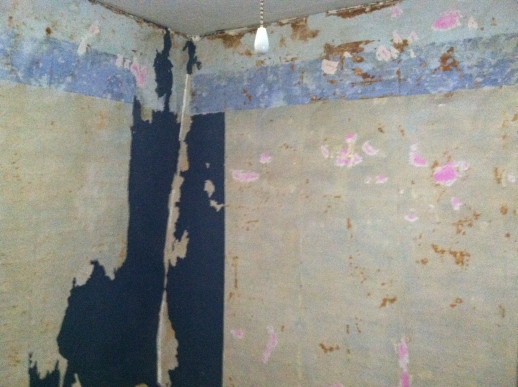 You can see above the lovely little brown bits of the oldest wallpaper I just gave up on. The pink/white is the spackling, which was still drying (hence the pinkness; it turns white when dry). You also see the blue. The topmost layer of wallpaper had been painted over with a dark blue by the previous owners, which made removal that much harder. These patches here are the only places in the whole room where wallpaper had been removed all the way down to the wall and paint was actually touching the drywall directly.

Above is, first off, a view into my office from her new room. Three of the four bedrooms simply connect to each other via doorways, with no hallway. That’s quaint…or inconvenient as hell. Fortunately, my office has its own set of stairs leading down to the first floor, and the door between it and her room will soon have a latch. Anyway, to the left of the door leading to my office is a wall that’s half drywall, half pegboard and a whole lot of plaster under the wallpaper there (there’s also a tiny alcove behind it). I knew there was no way I could remove most of the wallpaper without destroying that makeshift wall (that was put in to create that alcove, I guess), so I just gave up (sort of). At the top, you can see the floral pattern of what was the oldest layer of hellpaper. 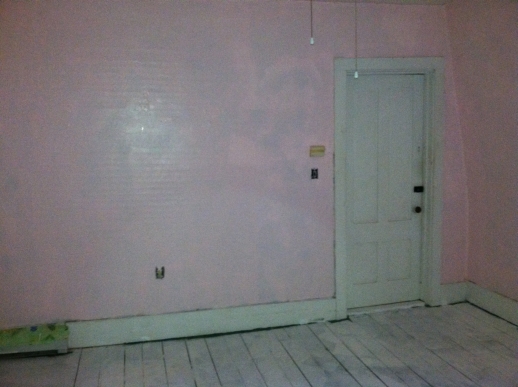 Above is with the walls mostly done (pale pink) and the wooden floor primed, but before I did the trim (pale purple) or the floor (forest green) 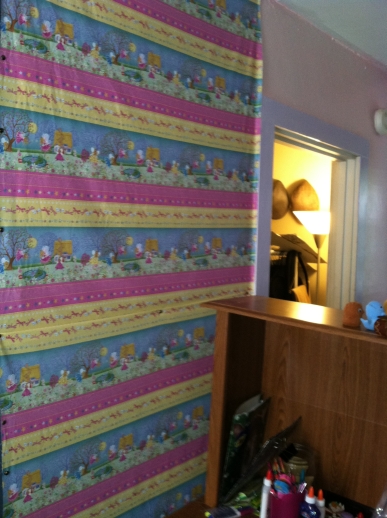 Above you can see how I fixed the messed-up little wall I “gave up” on. Instead of removing the hellpaper, I simply tacked up some fairy-themed fabric over it. 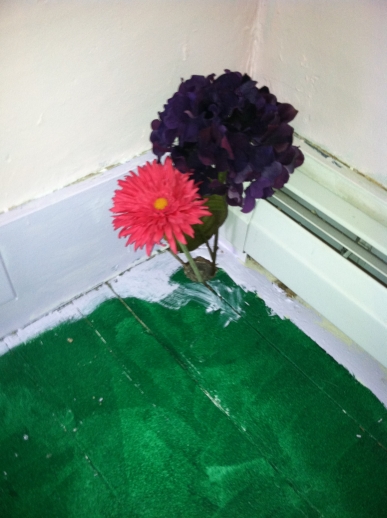 What fairy-themed and nature-inspired room would be complete without some fake flowers stuck in a hole that used to be for a pipe leading to the radiator we removed (along with all the radiators; we upgraded the heating system shortly after moving in eight years ago or so). 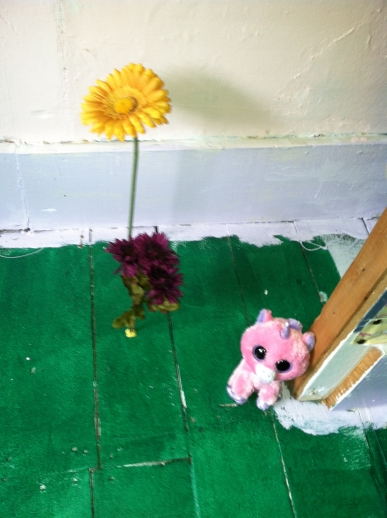 More fake flowers, stuck in two small holes in the floor whose original purpose I have forgotten. I think it had to do with the hot water heater that we replaced in the basement. Also, these flowers have the addition of a little pink unicorn pony because…again…nature and fairies! 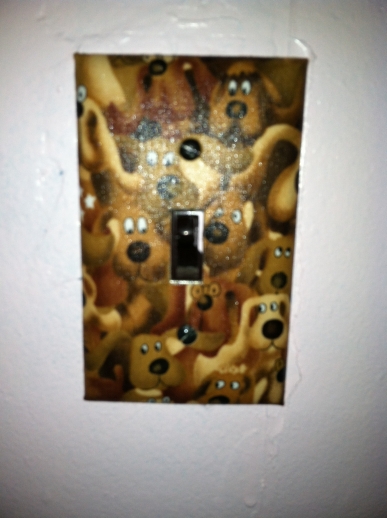 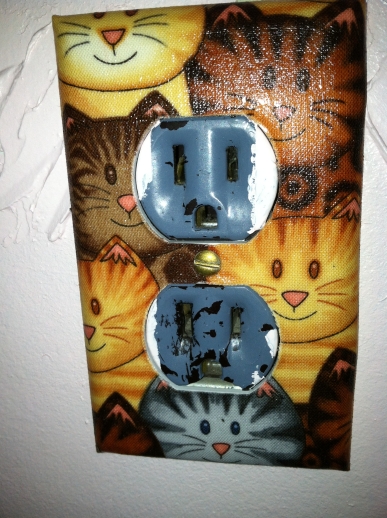 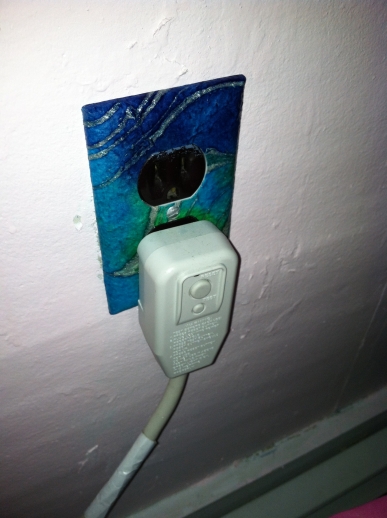 The above four photos are the new switchplate and outlet covers we got from a local farmer’s market we frequent. They are hand-decorated decoupage covers from a small business called Sue’s Crafts, and if you live in Maine and like her work, her email address is sdavis6000@roadrunner.com … I don’t know if she has a website or mails products anywhere, but she does great work. And yes, I know it was lazy of me not to scrape the old blue and white paint off the outlets. Get over it. I certainly did.

So, there you have it. We’re still getting together her new desk and some other furniture, but even though the room isn’t fully decked out, she loves it. Plus, now she has two windows instead of one, a ceiling fan and an air conditioner, which is one more window and a fan more than she had before.