The little goddess goes a couple times a week to the neighborhood center my wife runs as executive director (making sure the at-risk children and teens with no means have a safe place to be and aren’t on the streets tempted to get into trouble). Now, you might think my wife drags her there so that she can get some perspective on life and not get too comfy in her middle-classedness. Quite the contrary, our daughter loves going there to hang out with certain kids and teens there and to do art projects with the resident art guru volunteer and would probably be there every day as a distraction to my wife if she could get away with it.

What I didn’t expect was that she’d discover the game Plants vs. Zombies there. I guess one of the kids must have downloaded the trial version of the game to one of the center’s donated computers. So I downloaded the free trial for my home PC since she loved the game so much. She finally got to the part where the trial wouldn’t let her go any farther without me shelling out $20 to buy the full version. And, since she’s getting a laptop for her birthday (Shhhhh! Don’t tell her!), I figured I’d go ahead and install it and pay for the full version on her new (and very first hers-alone) computer.

As it happens, the activation code wasn’t a one-use-only thing and also worked on the version I’d put on my own PC. So, she’s been begging to play the game on my computer, displacing me (exactly the kind of thing that led to getting her a computer of her own) and motoring through all these levels she couldn’t access before (hopefully she won’t burn out on the game before she gets her laptop on Tuesday). Periodically, she asks me to sit with her and give her game-play and strategy consultation.

Except that a couple days ago, I had to run to the store and while I was out, she hit a stumbling block on a level and couldn’t figure out how to beat it. Apparently, as my wife tells me, she was quite distressed not simply at being stymied but the fact I wasn’t there to help her out.

Just how seriously does my daughter take this game (and this might be a precursor of her following in daddy’s game-playing footsteps)?

Well, here’s the note she penned while I was at the store: 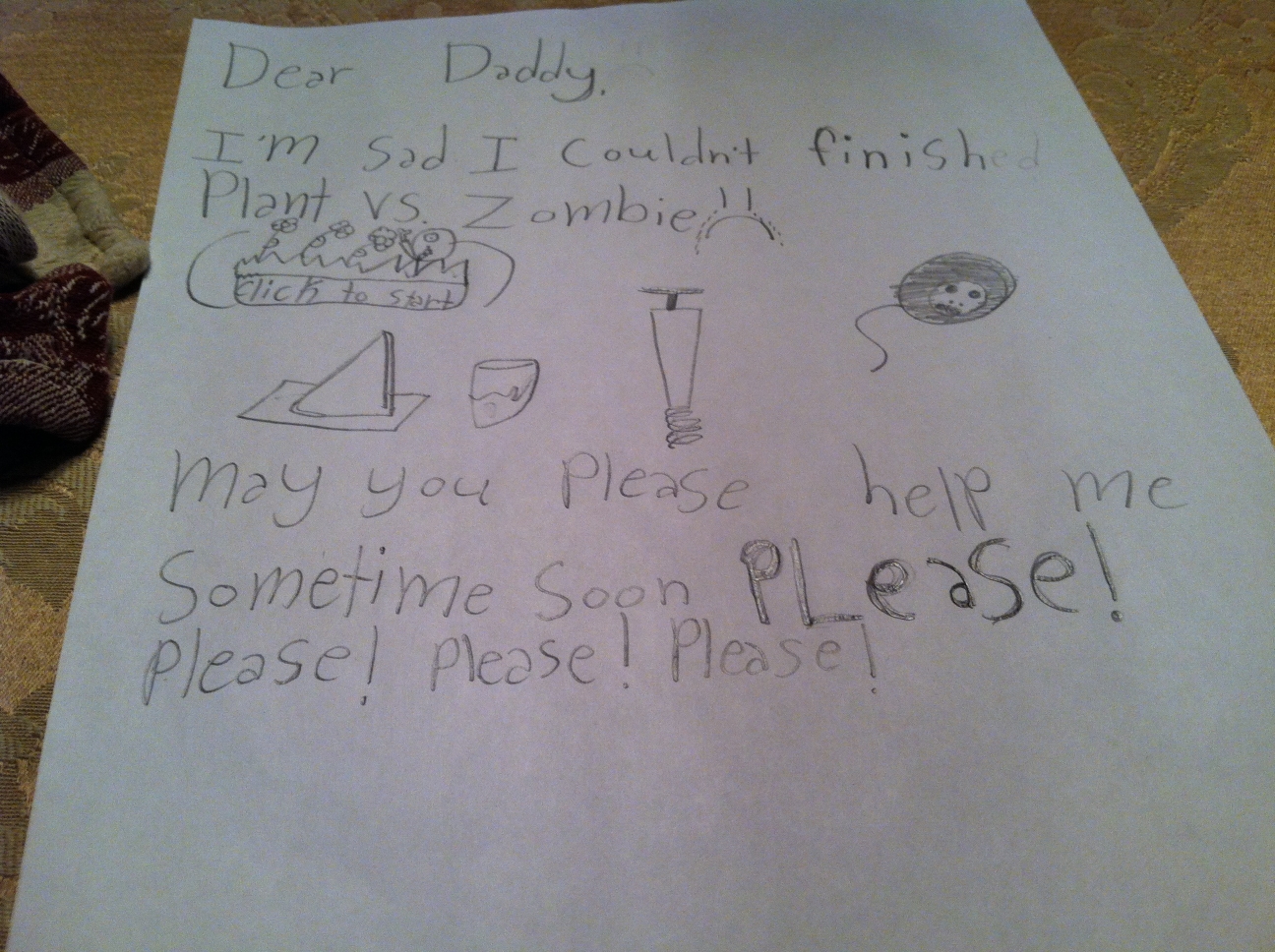 If you’re a Plants vs. Zombies player, you probably recognize at least some of her drawings: The load-up graphic from the start of the game, the traffic cone some zombies have on their heads, the bucket that others have on their heads for even more protection from your attacks, the pogo stick of the dreaded pogo-jumping zombies and a balloon that the floating zombies have tied to them.