I might have mentioned this before, but my darling (now eight-year-old) daughter has not only a bubbly, energetic and charming personality, but also a very dark tinge to her outlook at times. Again, very deity-like, I suppose, and probably our fault for naming her after a goddess. She will fixate on the notion of death and evil sometimes, asking us to tell her all the details of any tragedy or crime she overhears on the radio. In playing with the Barbie dolls with my wife, the plotlines often turn into tales of zombies, curses and dismemberments—and that was long before she started adding “Monster High” dolls to the mix with the Barbies. Yesterday, she got cranberry juice at a breakfast restaurant instead of her usual orange juice, and loudly announced to us (and several people near us) that she was drinking and very much enjoying blood.

The level of her fascination with the morbid is alternately amusing and disturbing, but then again, I have to remind myself I wrote tales with vicious, bloody, gory battles in them when I was a youth, and I turned out OK (I think…my wife might disagree).

Frankly, I’m half convinced that with her frilly nature and love of bright colors, along with her fascination with the macabre, that she will grow up to be a pink-dress-wearing Goth with flowers woven into a long, dark braid down her back. Oh, and the Doc Martens on her feet will be painted with hearts, butterflies and unicorns… 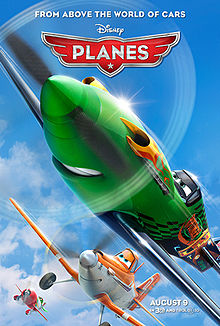 So, how did I get on this topic? We saw the movie Planes this week. Good flick. It’s based in Pixar’s Cars universe, where the world is a world of vehicles with human personalities. In essence, the cars, trucks, planes, etc. are stand-ins for people.

Late in the movie, the little goddess pipes up with a comment (don’t worry; we were at a drive-in, not an indoor theater): “Mommy, Daddy? There aren’t any people in these movies, are there? Not in Cars or Cars 2, either.”

“No, I don’t think there are any people,” my wife responds.

“Nope,” I confirm. “The cars and planes and stuff are the people. They don’t have humans in the movies.”

“I wonder what happened to the people?” the little goddess muses.

“Nothing, honey,” I say. “They just have vehicles instead of people. It’s like some of the old Warner Bros. cartoons…”

“I bet they all died,” my daughter continues.

“Uh, no, honey,” I insist. “There aren’t any people in the Cars universe. It’s a world where the vehicles are the people. It’s just a fun…”

“Yeah, the people all died,” she presses on. “I wonder what killed them?”

“Um, even if there were people and they died, that wouldn’t explain how cars and planes got personalities and eyes and stuff,” I note.

“I bet there were aliens and they came and killed all the people and maybe a few lived for a while and maybe they’re hiding out somewhere. And then the cars and stuff had no one to drive them or fly them and they got bored and made their own society.”

At this point, I realize there’s no point in dissuading her, so I return my attention to the movie and try to excise the sudden insertion of memes from The Walking Dead, The Day After Tomorrow and countless other apocalyptic movies that have no place in a Pixar animated flick.

I’ll start stocking up on cute Goth-wear for her soon. I’m sure she’ll need it.

The little goddess goes a couple times a week to the neighborhood center my wife runs as executive director (making sure the at-risk children and teens with no means have a safe place to be and aren’t on the streets tempted to get into trouble). Now, you might think my wife drags her there so that she can get some perspective on life and not get too comfy in her middle-classedness. Quite the contrary, our daughter loves going there to hang out with certain kids and teens there and to do art projects with the resident art guru volunteer and would probably be there every day as a distraction to my wife if she could get away with it.

What I didn’t expect was that she’d discover the game Plants vs. Zombies there. I guess one of the kids must have downloaded the trial version of the game to one of the center’s donated computers. So I downloaded the free trial for my home PC since she loved the game so much. She finally got to the part where the trial wouldn’t let her go any farther without me shelling out $20 to buy the full version. And, since she’s getting a laptop for her birthday (Shhhhh! Don’t tell her!), I figured I’d go ahead and install it and pay for the full version on her new (and very first hers-alone) computer.

As it happens, the activation code wasn’t a one-use-only thing and also worked on the version I’d put on my own PC. So, she’s been begging to play the game on my computer, displacing me (exactly the kind of thing that led to getting her a computer of her own) and motoring through all these levels she couldn’t access before (hopefully she won’t burn out on the game before she gets her laptop on Tuesday). Periodically, she asks me to sit with her and give her game-play and strategy consultation.

Except that a couple days ago, I had to run to the store and while I was out, she hit a stumbling block on a level and couldn’t figure out how to beat it. Apparently, as my wife tells me, she was quite distressed not simply at being stymied but the fact I wasn’t there to help her out.

Just how seriously does my daughter take this game (and this might be a precursor of her following in daddy’s game-playing footsteps)?

Well, here’s the note she penned while I was at the store:

If you’re a Plants vs. Zombies player, you probably recognize at least some of her drawings: The load-up graphic from the start of the game, the traffic cone some zombies have on their heads, the bucket that others have on their heads for even more protection from your attacks, the pogo stick of the dreaded pogo-jumping zombies and a balloon that the floating zombies have tied to them.

Saturday Night. Dinner at a local Mexican joint with the family. A television screen on one wall playing a Panama vs. Honduras FIFA football (soccer) game.

Daughter: That guy playing in that game on the TV is down on the ground.

Daughter: He’s curled up like a teen-aged girl on the bed who’s really sad because her parents told her she couldn’t go to…I don’t know…a really cool party or something.

…I guess I should be glad that she’s been able to get something out of “Jessie,” “Wizards of Waverly Place,” “The Suite Life” and other such fare from Disney and ABC Family that she can apply to real life.

As with most kids, teaching or explaining humor, particularly grown-up jokes, is a challenge. Our little goddess, though, at least began to recognize (and use) sarcasm early. Must be genetic. One of the first big words I learned from my mom was facetious and as you might guess, she used sarcasm often. I got bad pun-making from my dad.

One of the earliest “good” jokes my girl finally learned (a couple years ago now, I think) was:

… Because he was feeling crummy!

Get it? Crummy? Crumb-y? Cookies crumble…Heh he hee…. Yeah, you’re all grown-ups; you figured it out.

For a while, she’d tell that joke between three and 10 times a day. You think that Larry the Cable Guy and Lisa Lampanelli know how to wear out a routine and drive it so deeply in the ground that the funeral services have to be held in China? Well, they ain’t got nuthin’ on my girl!

Anyway, for a year or more now, the wee one has been trying to craft her own jokes. Knock-knock jokes, punchline jokes, puns…you name it. Not with much success, mind you. They almost never make any sense.

But just yesterday, in the car:

Daddy, why did the peanut go to the doctor?

…He was feeling nutty!

By the way, my wife figured it out a split-second before our girl actually spit out the punchline, so kudos to her. But, at last, my daughter has made a legitimate joke. Also, even more to her credit (and astuteness), our girl realized there was a slight flaw in her joke, and noted she probably should have said therapist instead of doctor. For what it’s worth, I also suggested that using almond or pecan might work better, as they don’t have nut in their name and would be less likely to give the punchline away.

Just wait until we hit the road with a polished routine. We’ll be a hit in the dinner clubs in Florida that are filled with retirees, and whomever is still alive in the borscht-belt circuit, I bet.

I want food; I want it now
I don’t care what; I’ll eat a cow
I’d drink fig
I would eat a live pig

Sing, sing to babe
You’ll be happy;
In your dreams, you can ride a wave

You sketch and write;
When you’re done what a beautiful sight