OK, after yesterday’s rather intense and not-so-cheery post, the inaugural one of this blog, let’s get to stuff more directly related to the goddess of this blog’s title. Yes, my currently 7-year-old girl who is, in fact, named after a goddess (interestingly, there is another woman living near us whose uncommon name is the same pronunciation as my wife’s, and her daughter is named after a goddess, too…though a different one).

As we left the library where darling daughter’s weekly after-school art club is held, it occurred to me I should probably tell her I was launching  a new blog that very night that would focus mostly on the ups and downs of raising  her  and what I’ve learned from that so far.

After all, this petite firecracker is going to quite likely be responsible for determining whether my advanced years will be spent locked in an attic, sent to a good retirement community or whatnot.

She was actually pretty thrilled; more so than when she realized a couple years ago that I wrote a superhero fiction blog and she insisted I would have to write a story with the title “Fishboy and Madman Strike Again” (I’m pretty sure the plot I came up with to go with that title wasn’t anywhere near what she had in mind). Her enthusiasm over being written about publicly was undampened even when I mentioned I’d talk about the things that drive me nuts, too. I guess being the center of attention is enough for a little goddess, regardless of what kind of attention.

In any case, it took less than a minute after I told her this for her to say, “You know, Daddy, I know what the first thing you write about should be.” (Psssst…don’t tell her she got upstaged by Quvenzhané Wallis for the first post).

“You should talk about the daddy-daughter tea you and I went to. Just you and me.”

Honestly, dear readers, there isn’t much to say (plus, it was in May 2011, so I don’t remember all the details), but who am I to refuse such a sweet suggestion? It was held in Portland, Maine, at Dobrá Tea, and hosted by a great organization called Strong Fathers Maine. I’ve never felt a need to avail myself of their services much because I’m either already a strongly committed and involved father…or I’m too cocky for my own good. But I do love what they stand for and I’ve had a couple opportunities to cross paths with them (pleasantly; no fisticuffs involved…this isn’t Fight Club, folks)…and the daddy-daughter tea was a really nice chance for me and the wee girl to go to a very nice tea house, peruse a menu of teas bigger than some phone books, have some fresh-baked sweets and bond in the midst of other daddy-and-daughter pairings (and maybe one or two trios).

Honestly, I’m not a huge tea guy, and probably won’t be until someone invents some teas that taste like I’m drinking  coffee, India pale ale or Mountain Dew Code Red. But it was a really nice time with her. I spend a  lot of time around my daughter already, working from home and all, but it was one of the few times it felt like we had some kind of magical, father-daughter bonding time. You know, aside from the times I sometimes still pick her up and she wraps her arms around my neck and buries her face in one shoulder; my back hates me for it now that she’s passed the 50-pound mark, but what the hell…

…anyway, got a little distracted there.

While there’s no grand tale to weave about the tea event (even though I seemed to have rambled on quite a bit), the least I can do is share a photo of us there (there are three other photos, much cuter, but I’m not trying to plaster her face all about the web). For the record, the reading material you see was from a comic book shop just down the hall; I’m doing my best to slowly mold her into a comics nerd) 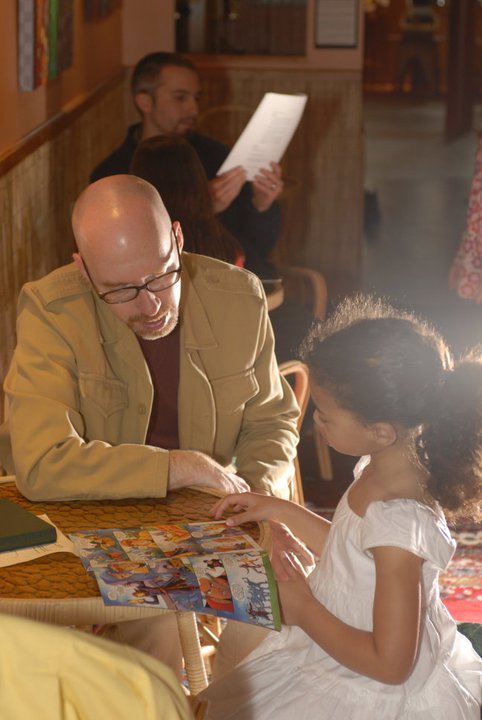 Whether they’re boys or girls and whether you’re a mom or a dad, hold ’em close, folks. They’re gonna grow up on us all too soon. One of mine already has, the ungrateful cur!