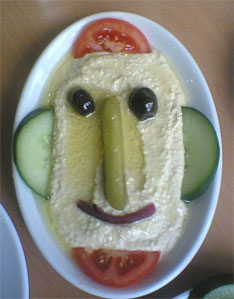 Bloody and flesh-rended damnation! Hellfire and nether-douchery! Curse Deacon Blue to the lowest pit of the Abyss, where I shall eternally direct cockroaches to crawl across his skin, command “American Idol” rejects to sing power ballads to him, and order Dr. Josef Mengele’s demonic shade to give him “special” massages involving car batteries and electrodes.

Can you see the olive oil tears dripping down my mashed chickpea face? February 2010! Do you know what that is? It’s the last time I was forced to endure the indignity of doing this Q&A column for Deacon Blue. For well over a year-and-a-half, I have eluded this foul man through the many layers of the multiverse. Even Dog the Bounty Hunter couldn’t find me. Not even paparazzi photographers. Not even Google Map searches

And how did he finally track me down? Social media. And Steve “Oh look isn’t the iPad cool I created the Mac I’m rich and wonderful and changed the world” Jobs is to blame. If he hadn’t posted on Godbook that we various higher powers of the many pantheons were considering giving him a demi-godhood now that he’s shucked off his mortal coil, the deacon wouldn’t have known where to find me. And how did Deacon Blue get a Godbook account anyway? He’s a deacon, not a deity! Curse you, Mark Zuckerberg! It’s too late for me to do anything about Jobs, because he’s already dead and his applications are already filed, but for letting a mortal know about Godbook…especially THAT mortal…I will see your eternal soul in Gehenna before I let you taste godhood.

Q: So, what do you think that chances are of New Jersey Gov. Chris Christie winning the GOP nomination and taking the Oval Office from Pres. Barack Obama? – The Situation’s Smarter Second-Cousin, Jersey Shore, N.J.

A: While I give you “mad props” (as the youth like to say…or at least how I like to believe the wretched street urchins say) for being able to string together a more coherent thought than your cousin or anyone else on MTV’s “Jersey Shore” can, you apparently need to bone up on your listening comprehension skills. The man has said “No, I’m not running for president in 2012″ exactly 8,932 times by last count, in 17 different languages, including American Sign Language (like GOP hopeful Herman Cain, however, I admit that I don’t have the facts to back this up). As such, I think you must settle for the fact that with a group of nutcases (and loser drop-outs like certain Alaskan folk who sold their soul to me) and Mitt Romney in the race, it’s going to be Obama vs. Romney, with a likely Obama win since the series “Big Love” has probably put America off the idea of a Mormon president.

Now, this fills me with no small amount of dismay. I’ve been trying to get the other, more volatile, out of touch, batshit crazy, make-up-stuff-just-to-please-the-masses folks to the forefront, but I’m not going to wield my full juju on one of their behalf without a contract in blood and a soul in hock to me.

After they saw what the loss of a soul did to Sarah Palin’s sanity and job prospects, they’ve been a bit leery of me. Oh, well, there’s always 2016. If I have my way, though, it won’t be Chris Christie then, either, as he’s used words like “negotiate,” “compromise” and other reasonable terms that suggest he might actually try to get useful things done if he were in the Oval Office. That’s not what I’m looking for.

Q: I really want my wife to get into a three-way with me and the hot next-door-neighbor. How can I go about making this happen? – Russell Handabout, Cupertino, Calif.

A: I took this question from Cupertino in honor of Steve Jobs’ passing, and I would like to sincerely say that you should sit down with your wife, explain your desires and needs, and explore her own needs, with the notion in mind that you, too, may need to engage in some activities for her benefit that you might never have considered before. You may also need to abandon this specific fantasy but be open to a different sort of direction in life that both of you can forge together sexually. Be thoughtful, considerate and open/honest in your communications…

…oh, shit…I just couldn’t keep going without chuckling and spewing olive oil all over the keyboard. That would be waaaaay too much work, and frankly, might actually be part of building healthy sexual communications. So, my real advice?

And lots of it.

A: Cincinnati Bengals vs. Buffalo Bills, with the Bills for the win by a 24-point margin.

3 thoughts on “Acts of the Hummus Idol: Back from the Dead Edition”