So, my goddess-child started her St. Patrick’s Day pretty much like any other Sunday. Wake up too early (even though she’s got a bit of a cold), fire up the iPad and start watching streaming on Netflix (“Wizards of Waverly Place” was on tap this morning).

Regret was coming though.

My wife got up a bit on the late side because both she and I decided to ring in St. Patty’s Day in the wee hours of midnight to around 2-ish rather than mingle with drunken masses during the daylight and early evening hours today during the usual celebratory period.

Regret was still coming…though not really in the form of a hangover.

When my wife did get up, our little girl, who’d been pretty chipper and happy to do her thing in her room up to that point, whipped out the poopy-face and got the pouty lip and hung head and general vibe of sadness. Mostly fueled by…

…you guessed it! Regret had arrived.

When queried by her mom what was wrong, the small goddess announced that she was sad that the Leprechaun, who for the past few years had left small gifts and candy after eluding our Leprechaun traps, didn’t visit us this year. Which I would have felt bad about, if it weren’t for the fact she doesn’t believe in a St. Patrick’s Day gifting leprechaun anymore. (See the post here for more about the death of him and another magical creature.) Both my wife and I resisted the “I told you so” urge, which would have gone something like, “This is what you get when you keep asking so many questions about fun childhood things.”

Instead, we tried to be sympathetic while also not making a big deal about it.

Still, I felt a little bad for her.

Which is why this green bouquet currently decorates her room (since I had to go to the store to get fixings for making my wife a breakfast burrito today): 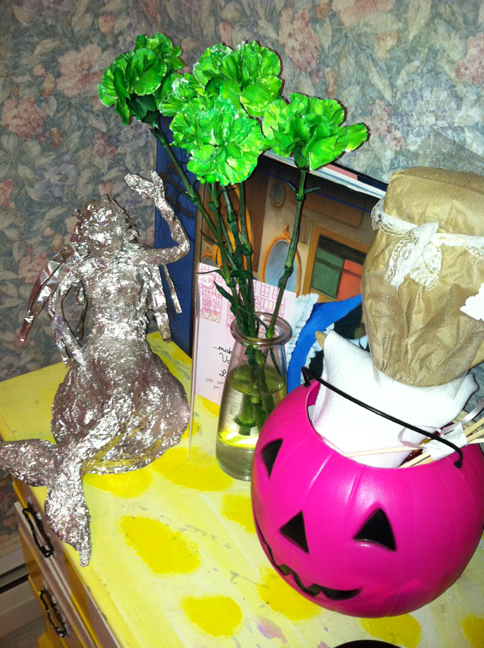 Goes well with the fuchsia jack o’ lantern trick-or-treating bucket and aluminum foil mermaid, don’t you think? We’ll see if they dry out later on nicely enough to stick around as a semi-permanent addition to her dresser-top.

A repost here at the new blog from my original (and still slowly chugging along) blog Holy Sh!+ from Deacon Blue.

I sit here now, glittery sparkling blood on my hands as I type. I can’t wash it off, any more than Lady Macbeth’s incessant hand washing could remove the memory of what horrors she had unleashed and sins she had committed. *Sigh* Where do I begin? I suppose with a simple fact. A simple statement.

This afternoon, I killed the Tooth Fairy.

Granted, I wasn’t trying to. I wanted to save her. I wanted to preserve her. But her death is now laid at my feet.

Such a sudden thing it was, too. I took my darling daughter, who just a couple weeks ago turned 7, to the children’s museum in Portland, Maine, so that our favorite grown woman (her mother, my wife) could have brunch with some 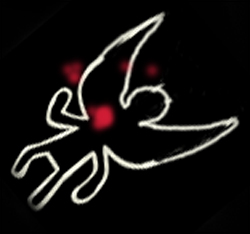 people she had wanted to meet for a while. We had barely finished paying for admission and then walking to the first room in the museum when Little Girl Blue said, calmly and without preamble, “Daddy, is the Tooth Fairy real, or do you and Mommy put the money under my pillow? Please be totally honest.”

In that moment, I realized I had been asked a question only slightly less distressing to parents than “What is sex?” or “Can I get a belly button piercing?” I did not pause, but simply led her to a small bench somewhat away from the other kids, sat down with her, and asked, “Do you really want to know?”

“You’re sure you want to ask this question, even though the answer may change things in your life?”

Twice now she had stressed honesty, and so there was no other path. Before, when a Kindergartner in her first year of school had told her the Tooth Fairy wasn’t real, Mrs. Blue simply asked, “What do you believe? What do you want to think? That’s all that matters.” My wife’s words (and clever ploy) were enough then, and they were true words, and Little Girl Blue continued to believe. Now, though, she was pressing me to be honest. I’m not sure why I drew this short straw, but I don’t think it would have been any different had my wife been the one with her at that moment; Little Girl Blue knows we’ll speak truth when asked, and most other times as well.

“Well, Honey, before I answer your question, let me ask you this: If it turns out Mommy and Daddy are the ones giving you the money, and I confirm that, do you think that there will still be money under your pillow in the future?” She was still young enough not to realize that I had essentially admitted the Tooth Fairy wasn’t real, but I was banking on that childish naivete so that she could still have an out if she wanted it.

She muddled over that for a few moments, then said, “Yes! …um, maybe not. I guess no. But I want to know.”

“I’m going to ask you one more time: Are you sure?” I queried, quietly but intently. “Sometimes, getting an honest answer to things changes things in ways you might not like. Do you still want me to answer?”

I put my arm around her and leaned in close, and said in almost a whisper, “No, Honey. The Tooth Fairy isn’t real. That’s Mommy and Daddy.”

“OK, Daddy,” she said after a short pause to let that sink in. “Thanks for telling me.”

“You’re welcome,” I said, and then played my last card to let magic be in her world a bit longer. “Frankly, I don’t know if any fairies are assigned any tooth-related duties. And they sure wouldn’t be carrying human money around, now would they?”

“No, they wouldn’t. I still believe in fairies, Daddy. Just not the Tooth Fairy.”

“That’s good, Honey. There are all kinds of strange and wonderful things in the world, even if they haven’t been proven they exist and even if we’ve never seen them.” Then I lowered my voice even more, and looked at the other kids in the room in a way that she couldn’t help but notice. “Don’t tell other kids, honey. Kids have told you the Tooth Fairy isn’t real, when you would have figured it out yourself someday. And you found out earlier than you probably needed to. But don’t ruin it for another kid. Let them ask the question when they’re ready to ask their parents. Some parents and kids don’t think about that; some purposely want to end that belief for other people because they think it’s stupid. So please don’t do it to anyone.”

I thought I was done until later in our children’s museum visit, when we were sitting down to a snack and she asked, “Are there any other magical things in my life that you and Mommy have told me about that aren’t real?”

Shit. So soon? The dominoes all ready to fall, all at once, on the same day?

“Do you have a specific question?”

“Are any other magical things in my life that aren’t real?”

“No, do you have a question about some specific thing?”

“I can’t think of one right now. But are there any other things?”

I paused only a moment, torn about what I should do, and then said, “I’m not going to answer that question. It’s too broad. Honey, we’ve had to tell you about horrible things sometimes, like people who hurt kids and people who kill people for no good reason. We’ve had to let you know about some bad things in life, and I think you should have as much magic as you can in life. For as long as you can. If you have a question about a specific thing, you can ask Mommy or me about it, and we’ll be truthful. But I won’t answer the question you just asked. But you can ask the questions about each thing as you want to. When you want to.”

“OK, Daddy. Thank you for being honest.”

And so, Santa Claus, the Birthday Fairy (Akimahs), the Leprechaun and the Easter Bunny have a reprieve. Not sure how long, but for a little while, at least.

It may seem weird, but I do feel guilty about the Tooth Fairy’s demise. My honesty killed her, and no matter how much that honesty was needed then, I still feel bad. That bit of magic is fun for the parents and the kids. The loss of that magic is a sign of my daughter’s maturity, and that’s a good thing; it warms my heart. But at the same time, it’s bittersweet. It makes me mourn for her childhood already, knowing that it is fast receding the closer she gets to tween and teen years.

But she still believes in fairies; that’s good. Mrs. Blue does, too, more or less. And we all believe in angels, because we’ve known at times when they’ve moved in our lives. So, it’s not all bad.

But Santa, Leprechaun, Easter Bunny and Akimahs: Draw up your wills and settle any unfinished business now.

You may not be long for Little Girl Blue’s world.

(Oh, by the way, since I wrote the post above in August 2012, the Leprechaun died in similar manner by November or December. So far, all the other beings are alive, though some of them on life-support, I suspect…)

P.S. If you think my bloody chalk outline of the tooth fairy is slightly grim, that’s OK. At least I didn’t go as far as this…or that…or the other one over here.